I’ve spent a fair amount of time thinking about Peter’s gospel message at Pentecost when the Church was launched (Acts 2:14–41). For sometime I thought it was curious that God used such a brief and boring sermon to save 3,000 souls! It must’ve been the anointing because that sermon was a bit weak—it kinda sucked, I reasoned. Actually it wasn’t until after years of Bible teaching, reading and study that my understanding of the Old Testament grew enough to begin to notice and appreciate the layered depth and prophetic insight with which Peter spoke. As a 21st century reader, I couldn’t readily see the significance of Peter’s words—which were rooted in a first century Jewish worldview.
To a first century hearer, Peter’s message was more readily accessible because they heard it through their complementary Old Testament worldview. When Peter quoted King David, his audience would have thought of God’s promise to David (2 Sam. 7:12–17)—the promise that so defined Israel’s existence and shaped the hope for a future king—a king they knew they needed to replace Caesar’s wicked rule. In his second recorded sermon, when Peter called for his hearers to repent and be baptized (Acts. 3:19–26), they implicitly understood that a new day had arrived. God’s kingdom was here and in order to enter into it, they needed to repent—that is, to turn from their sin and to align themselves with Christ, that they might live under the blessing of God's rule. These huge concepts of covenant and kingdom, central to the preaching of John the Baptist, Jesus and the first century Apostles, were fairly easily understood among Peter’s audience of first century Jews.

Our cultures today don’t possess many of the same assumptions as that of Jesus or Peter’s audiences. Covenant, sin, judgment, redemption, repentance and the kingdom of God—these theology-rich words were commonplace in Jesus' audience but they are merely empty religious phrases to our generation. Enter the challenge of sharing the gospel in the 21st century. 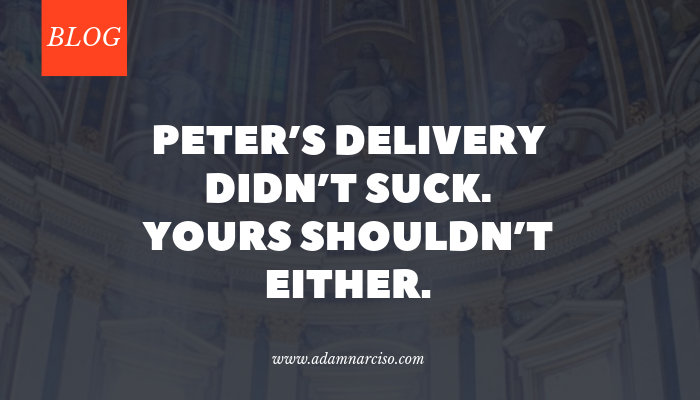 How do we convey the timeless truths of the gospel to cultures so far removed from Peter's Jewish context? A simple answer is that it’s our delivery, not the essence of our message, that has to change. This is called contextualization. While the truth of our message never changes, the manner in which we communicate it changes with our audience. This is precisely what Paul did in his message to the Greek philosophers at the Areopagus. Instead of speaking the language of Jews (i.e., law, prophets, writings), he quoted their own greek poets and philosophers (Acts 17:28). Instead of starting from the theologically loaded phrase kingdom of God (as did John the Baptist, Jesus and others before Jewish audiences), he started with creation (17:24). He still spoke of Jesus’ sacrifice, resurrection, return and the need for all to repent and believe (17:30–31)—but he did it from vantage point that was accessible to his non-Jewish audience.

Paul's sermon didn’t suck. While he never directly quoted even one Old Testament scripture, he conveyed plenty vital theological ideas. His message was dynamically crafted to reach his non-Jewish audience.

One of our challenges in contextualizing the gospel is avoiding language that our audience doesn’t understand—Christianese, it’s been called. The truth is, the longer you’ve been in church life, the more Christianese you speak. Meaning, the more you will have to work to contextualize your language to make it more accessible to others. In gospel encounters, I try to emulate Paul by avoiding inaccessible phrases, but conveying the ideas behind them instead. If I happen to use a churchy word, I follow it with a simple definition. If only we had a list of important words with helpful descriptions!
Here is a short list of Christianese and my take at simple definitions that are helpful to me in gospel encounters. You may find the list is too short or perhaps that some of the descriptions are still too churchy for use in your context. At the very least, this list causes you to think more critically about the gospel and those with whom you deliver it; because as a gospel messenger, you are a student of both!

Covenant: God's promise to complete what He started with humanity.

Sin: Our rebellion to God's leadership and ways.

Redemption: Jesus' work to turn it all around.

Repentance: We turn from leading our own lives and yield to Jesus’ leadership.

Faith. Trust in who God is and what He has done.

Salvation: God rescues us from the penalty and power of sin by giving us a new life in Jesus.

Sanctification: We become more like Jesus everyday as we yield to His leadership.

Baptism: a spiritual act that publicly affirms the new life you have received in Christ.

Kingdom of God: Jesus’ people living under the blessing of His leadership in the world, until He returns—when His work to turn it all around is full and complete.

If this blog spoke to you, please share it on social media.

We want to help you make an eternal impact.

Adam is author of New Identity: 30 Days of Prayer for Spiritual Transformation and producer of the Gospel Encounters eCourse. He and his wife, Jenny, have four children and reside in Franklin, TN.